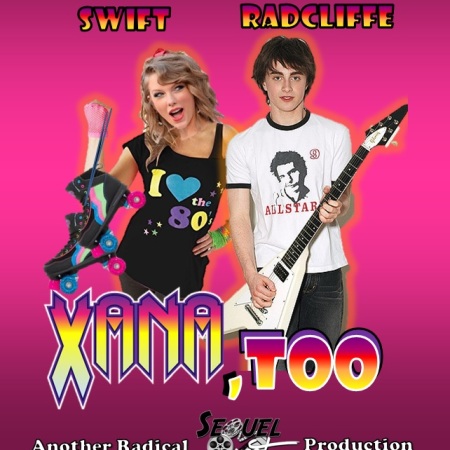 Pull up your leg warmers and lace up your skates, because this week SequelQuest is traveling back to the 80’s with Xanadu! Starring the unlikely screen duo of Olivia Newton-John and Gene Kelly, this roller disco box office bomb is big on musical fun, but scant on story, making it notorious in the world of “so bad it’s good” cinema.

But what do you expect from a movie combining 40’s swing music with classic rock sounds of Electric Light Orchestra? Yeah, it’s as bad as it sounds. That’s why Adam, Jeff, Justin and Jeramy (OK, mostly Adam) decided to jump back into the realm of magical, musical fantasy to see if there was any way of salvaging this maligned cult classic with a sequel story.

So what does an update to the cheesy world of Xanadu look like? In a universe where anything goes, the possibilities are endless. How about a horrific murder spree at the abandoned roller disco? Could Hollywood come calling for a kitschy revival? What about the adventures of the perky, muse diva offspring of Sonny and Kira from the first film?

This is one of our most ridiculous and fun episodes, but also marks our final recording with co-host and good buddy, Justin. It’s a great end of an era that gets to the heart of the SequelQuest style, so join in on the excitement and listen now.