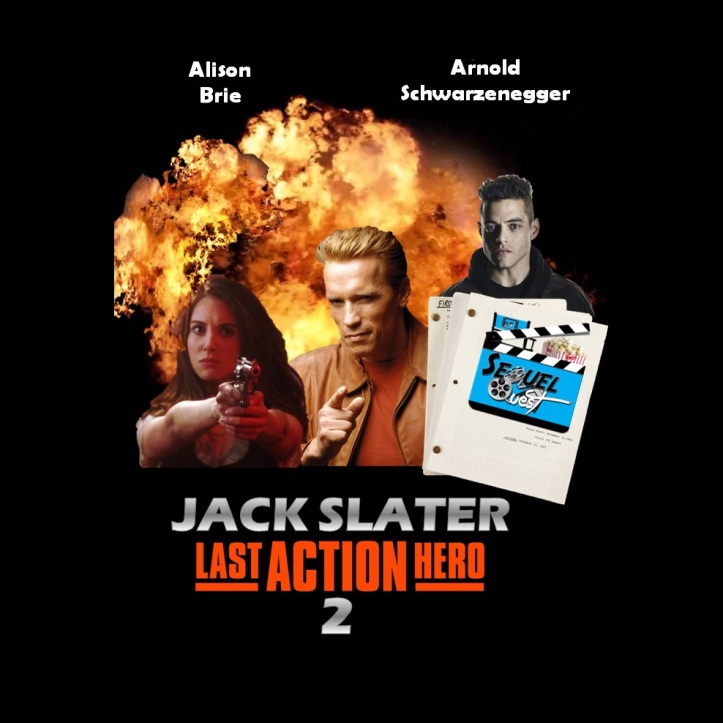 Missing this episode of SequelQuest would be a “Big Mistake” because we’re picking up the pieces of the failed Arnold Schwarzenegger film Last Action Hero from 1993. It’s the tale of a young boy named Danny Madigan who is transported into the world of his favorite action hero for a fantasy adventure movie experience that very few people bought a ticket for.
This satire of 80s action films starring Arnold Schwarzenegger, Austin O’Brien, Charles Dance and many familiar Hollywood faces is 25 years old this year along with it’s box office rival, Jurassic Park, but sadly no one is celebrating Jack Slater’s movie milestone. No one that is, but the SequelQuest crew.
Join Adam, Jeff and Jeramy as they grab hold of Houdini’s magic ticket to bring you three possible Last Action Hero sequel ideas. Will we follow the further adventures of Danny Madigan and Jack Slater as they serve villains cinematic justice? Perhaps a spin-off adventure with Ian McKellan as Death wandering the streets of Tinsel Town is more your speed. Maybe Jack Slater needs to be taught that representation matters as a young woman rewrites the action movie genre.
The action packed fun is all here in our latest podcast as we bring you Last Action Hero 2 in the often imitated, never duplicated SequelQuest style.