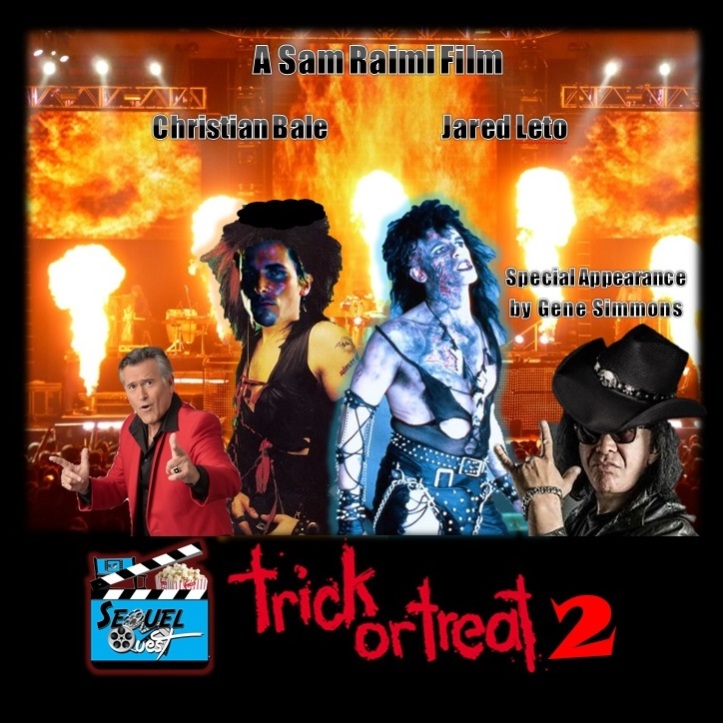 Sammi Curr, the demonic heavy metal rocker from cult horror flick, Trick Or Treat is being raised from the dead once again in this special Halloween episode of SequelQuest. The tale of high school outcast Eddie Weinbauer played by Marc Price contained an ear splitting soundtrack by Fastway and featured special appearances by controversial rock icons Gene Simmons and Ozzy Osbourne. It wasn’t the horror hit Dino DeLaurentiis was looking for, but the cult of Sammi Curr grew on VHS.
Rock’s Chosen Warriors Jeff, Adam and special guest from The Purple Stuff podcast, Jay do their best to summon the “metalspoitation” madness of the original as they pitch Trick Or Treat 2 in the modern day. Who will carry on the legacy of Sammi Curr and who will feel his rockin’ wrath? Listen and find out.
KISS fans Adam and Jay can’t help but gush about their fandom for Gene Simmons and the hottest band in world, so there’s an extra treat for members of the KISS Army. But the real excitement is in the ideas for a Trick Or Treat sequel so stand up and be counted as you listen to the fun.
To get Jay’s special Halloween offering of awesome Samantha Curr merchandise as mentioned in episode click this link https://www.teepublic.com/t-shirt/3206397-samantha-curr-limited-edition